Marine satellite VSAT internet on many ships is seen as essential. But, like any technology, it can occasionally let you down. I thought I would share the process of diagnosing and fixing a potentially show-stopping fault on one of our customer’s ships recently, and what can be done to make sure a $10 part doesn't ruin your day at sea.

The ship-in-question’s normal routine is long trips in the Southern Indian and Pacific Oceans. Here, the average wind speeds are the highest on Earth and the swells are free to build over thousands of km of open sea. Challenging conditions for any vessel.

On this trip, the usually solid C-band VSAT system had developed a few issues. Gaps in phone calls and super-slow internet were impacting operations. There was talk of re-scheduling or even cancelling future charters if the VSAT couldn't be fixed. An embarrassing and annoying problem was threatening to becoming a very expensive one.

Fortunately, the ship is covered by one of our in-service-support contracts so our shore-based technicians were able to jump on the case quickly. Connecting via the ship’s other satellite links - the so-called out-of-band management or OBM system - they were able to do some extremely detailed analysis.

Data logs and diagnostic tools showed that the stabilisation motors which normally hum away quietly and with minimal fuss were often driving up to full-power as they struggled to keep the antenna pointed. Although the seas down south can be huge, the 7m swells at the time weren't considered exceptional. The tried and tested Cobham Sea Tel 9707 VSAT should have been able to cope easily with conditions like these.

They noticed that drops in the radio signal coincided with tiny movements of one of the three motors that keep the antenna pointed perfectly as the ship pitches and rolls below it. Each time this cross-level motor reached its limit, the dish moved by a fraction of a degree. A tiny amount, but enough to send its radio signal thousands of km off-course into deep space, instead of landing it precisely on the distant satellite that would bounce it back to Earth.

By the time the ship eventually came alongside, the team were confident that they knew what the cause of the problem was and had mobilised a field service team. But it was a tricky and unusual fix that isn’t officially supported by the manufacturer. The good news was though, that the part itself, a simple bearing assembly, would cost only $10.

For most ships, this cross-level bearing would last the life of the system, typically 10 years or more. In this case, although the ship motion wasn’t extreme, the regular operations in big seas had shortened its life. Our colleagues who support ships working in the shallow, choppy North Sea, confirmed that they had encountered this type of failure before. 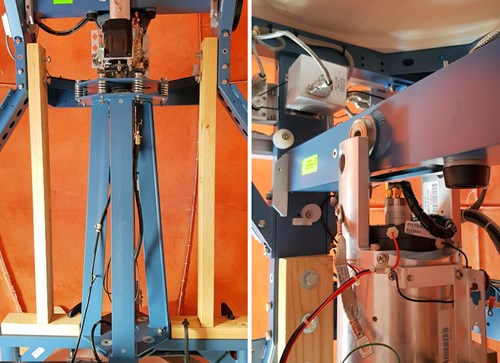 With proper planning and tooling, the actual repair was straightforward

Cobham Satcom support did a fantastic job of unofficially feeding our engineers the technical information they needed. The main challenge was to quickly improvise the special tooling needed to support the heavy antenna equipment frame and extract the bearing. Like most things in engineering with proper planning and the right tools for the job the actual work would be an easy task for our two field engineers.

And it was. With two brand-new cross-level bearings and a quick sea trial, it was clear that the problem had completely disappeared. The system tracked the satellite perfectly and internet and phone calls were back to normal quality. So what lessons can we learn from all this?

Firstly, try to have redundancy in maritime satellite communications. There are a few parts on any maritime VSAT that if they fail, can take down your communications. And some aren't quick to fix, even with a good on-board spares kit. Dual VSATs or other links such as Fleet Broadband or Iridium act as backup in case the primary system fails and are a very good idea if communications are mission-critical.

Secondly, have a good support team with a comprehensive and well-engineered out-of-band management solution. Every piece of equipment should be accessible even though the VSAT is down. In this case we were able to diagnose the problem and obtain parts and tooling long before the ship got to port, saving time and money. We were able to fix and turn the ship around quickly once it came alongside without having to wait for parts.

And lastly, every maritime operation is different, so adapt and implement an appropriate preventative maintenance scheme. This bearing normally lasts 10 years or more. But because of the unusual mission profile we've extended the annual maintenance checks for this customer to include monitoring of the cross-level and will replace these low-cost bearings every 2-3 years.

Jonathan is a professional engineer with a passion for all things maritime electronics. He founded Acutec Systems in 2004 and continues to lead the teams in Europe and Australia, delivering communications, entertainment and IT solutions for vessel operators.