Floating Production Storage and Offloading (FPSO) vessels and other moored, floating, offshore facilities operate at a fixed location. As they are in constant motion and often at isolated locations, they are unable to utilise fixed-dish microwave links which are the conventional, low-cost means of providing a permanent data service for offshore infrastructure.

Whilst mobile-maritime satellite networks such as INMARSAT and global VSAT services do support stabilised antennas, they do so at relatively high cost. These networks have centrally located data hubs through which all traffic must pass, increasing latency (delays to speech and data). 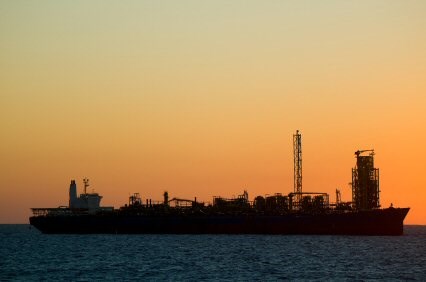 The solution for a typical network of two to three FPSOs and a shore-based corporate office consists of a Sea Tel 5009 VSAT antenna on each floating facility, with a fixed dish on the building ashore. Each of the sites has an iDirect 5350 satellite modem. A single Ku-band satellite footprint covers all four sites and there is dedicated bandwidth allocated for the network on that beam. A fifth site is the satellite hub which provides a broadband connection to the internet and public telephone networks.

The modems are configured as a Star/Mesh network. This enables a phone call on FPSO A to travel directly to FPSO B for example in a single satellite hop without going through shore-based infrastructure. This dramtically reduces voice and data delays on communications between sites.

Because the sites all share the same bandwidth, security is enhanced, costs are reduced and network performance is not dependent on demand from other users.

An optional Out of Band Management (OBM) and support solution further enhances reliability of the FPSO communications network.